Bennie and Shirley Smith, co-owners of Bennie Smith Funeral Homes, held their Holiday Celebration and Scholarship Benefit on the evening of December 29, 2018, in the Rollins Ballrooms of the Dover Downs Hotel and Casino. Approximately 800 people attended the celebration/benefit. Those in attendance included clergy, educators, politicians, business, and civic organizations. Many of the attendees have utilized the services of Bennie Smith Funeral Homes via one of the 13 sites that are located throughout the Delmarva Peninsula. In addition to the food, dancing and warm fellowship, this year’s benefit raised scholarship dollars to benefit students from two institutions of higher education – Delaware State University (DSU) and the University of Maryland Eastern Shore (UMES).

During the event, Mr. and Mrs. Smith were presented a Delaware Senate tribute, that recognized their corporate community services. The honor also recognized their years of education-focused endeavors, which includes awarding more than 200 direct scholarships to high school students. They continue to provide endowment funds to both DSU and UMES. Mr. Smith has previously served on the Board of Trustees for both universities. The tribute was initiated by former State Senator Margaret Rose Henry and presented by newly elected Senator Darius Brown of Senate District 2, Wilmington.

During the presentation, the Smiths’ also recognized three Delaware public servants – New Castle County Councilman Penrose Hollins, Wilmington educator Maurice Pritchett, and New Castle County Sheriff Sam Pratcher – all of whom will be featured in the funeral homes’ educational brochures to be distributed to youth organizations, churches and schools in 2019 as part of the theme “Know Your History.” 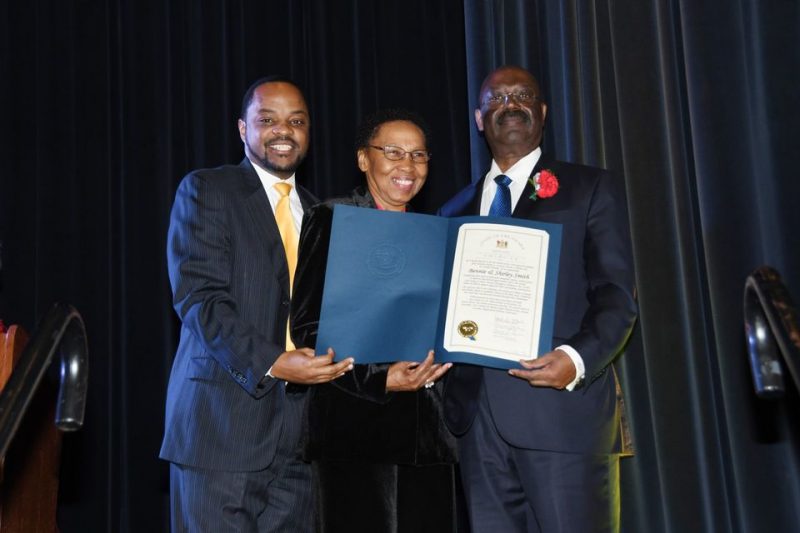 From humble beginnings on a farm in Faceville, Georgia, Bennie Smith evolved into a successful and caring businessman setting the standards for funeral homes across this country. Today, Bennie Smith Funeral Home(s) is one the largest African-American-owned Funeral Homes on the East Coast. With 13 locations up and down the Delmarva Peninsula, from Wilmington, Dover, Milford, Seaford, Millsboro, Salisbury, Easton, Princess Anne, Chestertown, the Eastern Shore of Virginia and more. For over 35 years, we've been caring for families like yours.